Testimony of continued grace of God
By Christine (Ruegg) Gloyne 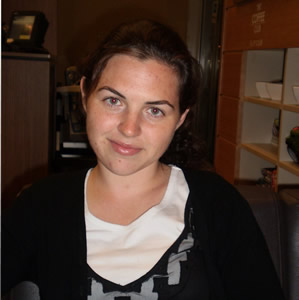 I have been blessed to have been raised in a strong Christian family, the oldest of eleven children. For as long as I can remember I have always had a desire for God in my heart and at the age of eleven I gave my heart to the Lord and was baptised in the name of the Lord Jesus Christ. This was a very real and special experience for me, however, it was only a beginning. During my teenage years I had several experiences where I knew God was dealing with me and directing my life. But when I was around nineteen years old I became more and more worldly. They were only small things that seemed borderline and I could get away with them and still feel very self righteous. About this time I started using a “tinted” moisturiser, which wasn�t classified as “make-up” but had a similar effect. Besides covering up blemishes it gave me a confidence (self confidence) that I did not have before. I came to the place where I felt I would never be able to go without wearing it. I was happy to look like a Christian but still wanted to be thought of as �classy� and accepted. My relationship with the Lord became more and more distant.

In October ’06 I was at some meetings where the preacher was preaching about the wonderful time he and his church had had with the Lord over twenty years before, where the Holy Spirit was poured out like in the book of Acts. I heard this type of preaching again a few months later. I felt very frustrated as I had never seen or experienced anything like this and it seemed to be something that only happened in the past. I knew that Jesus Christ is the same yesterday, today and forever and the Holy Spirit and gifts are still there for the Bride of Christ to benefit from, I had a longing to see it, but I didn’t believe it could happen. Then I heard a testimony from a fellowship that had the Holy Spirit fall on people after a meeting and they were speaking in tongues etc. Initially I felt so jealous and frustrated but then I realised that the Holy Spirit is still available today and the same God who moved in the ministry of Brother Branham is still God today. I realised then that it had been so long since I had felt the presence of the Lord.

By March ’07 I really desired to know the Lord in a greater way. One particular night I was praying along the lines of “Search me oh God, and see if there be any wicked way in me, Create in me a clean heart.” I added that I wanted this ‘no matter what the cost’ and immediately knew that it could well cost me. For a moment I considered withdrawing this last ‘clause’, but instead I decided that it was definitely what I wanted so I added it again. I know this prayer was a changing point in my life, although at the time I had no idea that God would answer it the way He did.

Shortly after this my parents went to a convention in Australia and on the morning of the day they were returning home, I was applying my tinted moisturiser when a voice spoke to me so clearly and said “This is the last day you will be wearing this”. My first thought was: Am I going to die today? There was no way I would be able to face anyone without it, and I truly felt that I would rather die! I said to the Lord, “I’m sorry, but even if You paint it on the sky not to wear it, that is one thing I could not give up”.

That night when my parents arrived home one of the first things my mother said was “Christine, I have to tell you something”. I immediately burst into tears because I knew what she was going to tell me. She said “You know the cream that you have been wearing? The Lord has shown me that it is wrong and I have to ask you to stop wearing it, I�m sorry that I ever let you begin”. I cried for a long time and considered just disobeying but I knew I couldn’t do that, so I really asked God just to let me die. Then at around 2.00am the Lord showed me a picture of a lantern which had the glass smeared with that cream and you couldn’t see if there was a flame burning or not. A voice said to me “That is what it is like when you wear that cream, the Holy Spirit cannot shine through you”. At that moment I made the decision that I would never wear it again, but I felt so completely broken and upset.

I spent the next two days in this state. On the evening of the second day my Mum gave me a tape to listen to which had arrived in the mail from a brother in the Lord who we had never received a tape from before. I listened to it and it really blessed me and at the end of the tape they sang the song “It will be worth it all, when we see Jesus.” Suddenly I saw things in perspective for the first time. I realised that I really loved the Lord Jesus more than anything else and that I had been so tricked by the devil to focus on such temporary and shallow things which mean nothing when weighed against eternity.

Five weeks after this I went to America and then to Switzerland. While in America I went to a convention. The preacher had been preaching about the Holy Spirit being real and he began to make an altar call. I was sitting in my seat and felt such an urge to say “Oh Lord be glorified through me.“ As I said this out loud I felt the Holy Spirit coming closer and closer and then as it ‘fell’ on me I was on my feet and praising God in an unknown language. This went on for about two hours and even after I got back to my hotel room I still couldn’t speak English.

From this time my life has been different. The Lord is so real to me! After this I went on to Switzerland to visit my Dad’s unbelieving family and my aunt kept exclaiming about how different and happy I was, compared to the last time she had seen me two years before. She usually doesn’t feel comfortable talking about the Lord, but she kept asking me about things, and she said that she could see there was something real in me that wasn’t “just what I’d been taught” She admitted that only God could do that to a person and that she would like what I had, but couldn�t give up her ‘self’.

When I got back home to New Zealand, I was desirous for my sister Melanie to experience the reality of the Holy Spirit as she had been seeking it also. One evening we had watched a DVD of my Dad preaching at a Singapore Convention. In the sermon he had talked about sheep and goats. Something in this had stirred up my eleven year old sister Elanah. She came into my room soon after I had gone to bed and said that she didn’t think she wanted to be a Christian anymore, as she said she had never felt the Lord. I said without even thinking “Well, we can change that right now. Would you like to pray with me?” She said “Yes”, so we got down on our knees beside the bed and began to pray. There was a real anointing as I prayed and the Holy Spirit really fell on both of us and we were praising God. (She was now thanking God that she was a sheep – whereas before she was annoyed because she said she preferred goats!) Melanie by this time had joined us and also began crying out to the Lord to fill her with the Holy Spirit. This went on for about twenty minutes. She said later that the devil was telling her that this would end like every other time she had sought the Holy Ghost – and that the next day everything would be the same as before – empty! She had always felt that she did not have the authority to tell the devil to get behind her, and somehow she was fearful of this. But suddenly she shouted out, “I’m not giving up. Satan, in the name of Jesus Christ get behind me”. She was immediately lifted to her feet and praising God with all her might. The Holy Spirit filled her and He became so real to her too. Praise the Lord!

Together, Melanie and I began to pray for things and we had many wonderful times in the Lord. One time in particular we were really praying for our fellowship as not everyone had seen God move as we had. One night after we had been praying, the Lord gave us a tongues and interpretation message that He would move in our fellowship. It was only two weeks later that the Lord really came down at the end of a meeting. (Strangely this particular day my Dad was feeling very sick and had not felt like preaching but had anyway. There was certainly no charismatic work up preceding the out-pouring of the Spirit!) It was like waves coming over the people and it had a big effect on many of the young people, some of whom did not even believe God was real and only came to church because they had to.

Praise the Lord. He certainly is the same yesterday, today and forever!

God bless you all, Christine Ruegg